Digitalization according to AL-KO VTE

With the new Gateway based on CL-BUS (CBE LIN BUS), the Internet of Things boards recreational vehicles giving users the possibility to control all compatible units from their smartphones, even remotely

Recreational vehicles are not just mechanics, living pods and technical devices. The vehicle base always plays a major role in the choice of a new RV, but new elements have been gaining importance for some time now. First and foremost, electronics, which are going from a concealed utility management system to a control and cross-communication platform designed to increase onboard comfort.

A strong boost comes at the Caravan Salon in Düsseldorf from AL-KO Vehicle Technology Electronics (VTE), a company of the American DexKo group recently formed from the merger of Italy’s CBE and Nordelettronica. The company is presenting the new gateway: a new device capable of dialoguing with units of various types to allow them to be controlled both locally and remotely. It interconnects the devices installed in motorhomes and caravans, collecting working information from the various connected systems (such as the CBE and Nordelettronica control panels, HVAC solutions and refrigerators, for instance) and conveying it to the app for smartphones from which the user can impart operating commands.

The dialogue between the new gateway and the connected units is basically over the CL-BUS protocol (CBE LIN BUS), launched as early as 2019 and now found on thousands of recreational vehicles. In its basic configuration, CL-BUS allows all CBE and Nordelettronica products that adopt it, such as control panels and switching chargers, to talk to each other and exchange information. The CL-BUS over the gateway interface is also compatible with CI-Bus, a standard developed in 2011 with the support of the CIVD (Caravaning Industrie Verband e.V.), the German association of manufacturers and suppliers in the recreational vehicle sector. Today, 67 companies, including manufacturers of recreational vehicles and manufacturers of components and accessories, are members of this platform.

The new gateway integrates wired and wireless communication capabilities enabling the link between the internal communication world of the motorhome/caravan and the external digital world. The latter implements the Bluetooth standard allowing a local dialogue with the app when the user is only a few meters away from the device, and Wi-Fi from an Internet of Things (IoT) perspective. The Wi-Fi connection can be used to create an access point with remote connectivity, using the mobile phone system (4G or 5G) for instance.

At this point, the new gateway is also accessible from a long distance meaning that end users can control the units in their vehicles (for pre-heating or cooling the vehicle, operating the refrigerator, activating or deactivating devices, and so forth).

Software is an important aspect. The app that was developed specifically for the new gateway required a lot of effort from AL-KO VTE engineers. This huge development activity was finalized in 2021. Equally interesting is the fact that the new gateway natively integrates geolocalization functions useful for remotely locating the vehicle on which it is fitted. With this solution, the way towards digitization, connectivity and opening to the Internet via IoT is now well on track.

“The Internet of Things can now be extended to any unit, including recreational vehicles”, said Alessandro Chies, Head of Sales at AL-KO Vehicle Technology Electronics. “Taking advantage of the CI-Bus protocol, we are now offering a system that works as a collector to connect compatible units, which can be heating and cooling systems, refrigerators, antennas, with a local device over Bluetooth. From here, using an access point, the data can be shared in a customer cloud achieving two-way communication to and from the vehicle, and being able to remotely control everything that can be controlled locally over Bluetooth”.

“The decision as to which and how many possibilities are actually made available depends mainly on the OEM who decides to implement the new solution on vehicles. The AL-KO VTE gateway is mainly intended for RV manufacturers”, said Ugo Francescutti, Managing Director of AL-KO Vehicle Technology Electronics. “The solution is already installed on some new vehicles at the Caravan Salon. All this does not exclude that in the future the gateway could also be made available as an aftermarket product because compatibility is with all devices complying with the CL-BUS and CI-Bus standards. The product has already been designed with a B2C perspective in mind, with a design that is easy to understand and simple to use.”

The Düsseldorf trade fair is an opportunity for AL-KO VTE to present this new solution on a larger scale and gather important feedback on the work done so far. The new gateway is marketed under the brand name AL-KO. This in itself is a proof of the achievements from the merger of CBE and Nordelettronica, which have combined their know-how to develop a product that incorporates the best technologies. 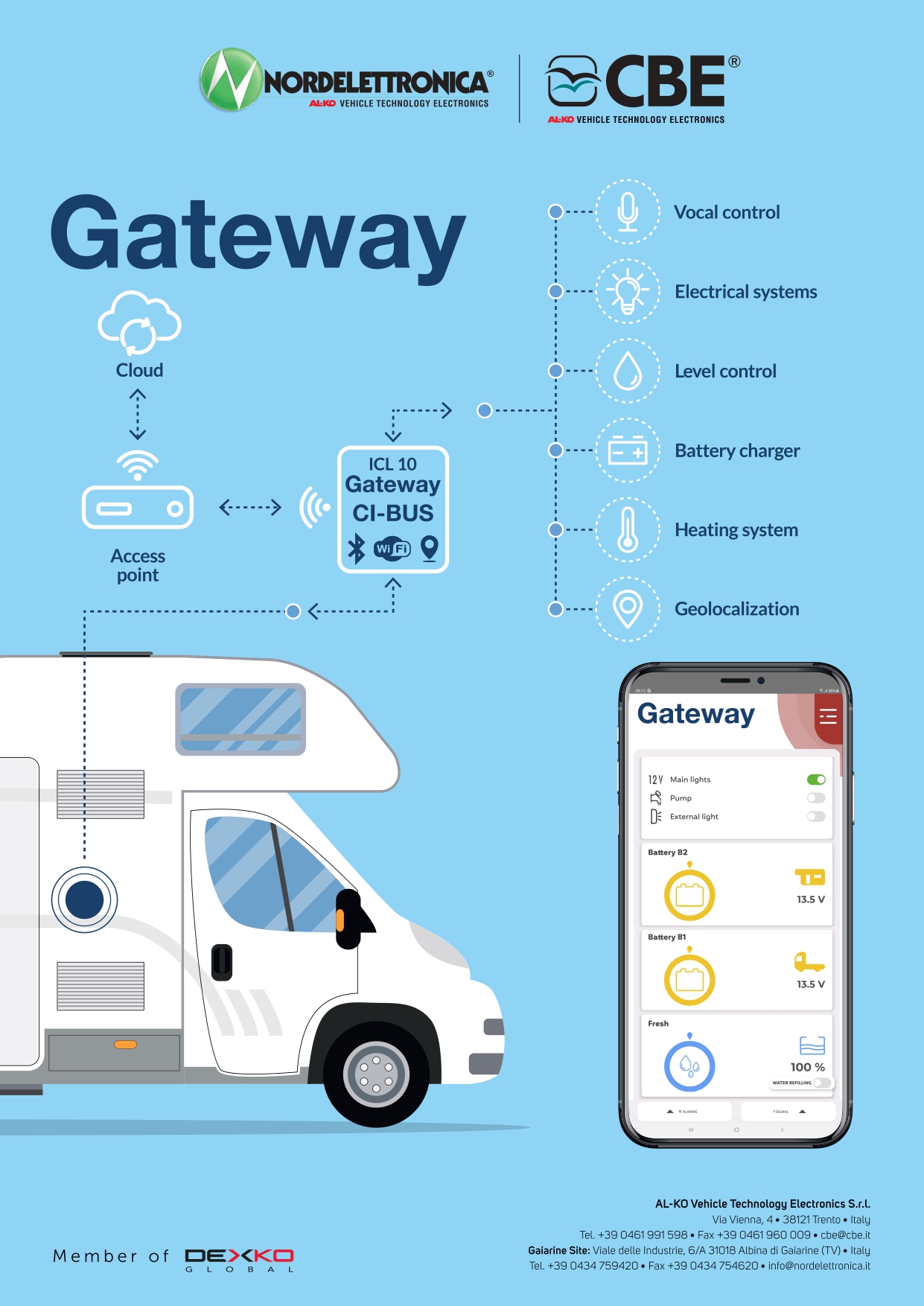